As far as we know, Christopher is the first Colucci to go back to Avigliano since they emigrated.

We spent the day walking its narrow streets.  The town closed up between 12:30 and 3pm.  We heard families eating their lunches behind lace curtains as we passed.

We discovered the town crest…..

…and we saw surnames we recognized on a memorial that honored those who served in various wars–Colucci’s, Labella’s, Claps. 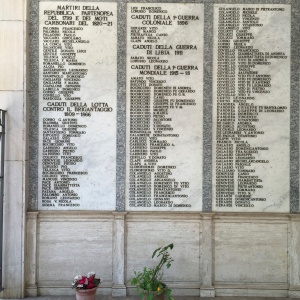 We ducked into churches and wondered where the Colucci’s were married? baptized? confirmed? 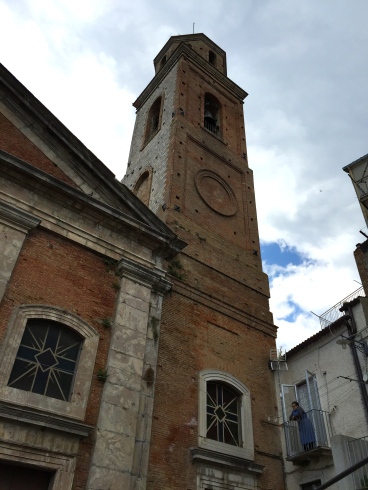 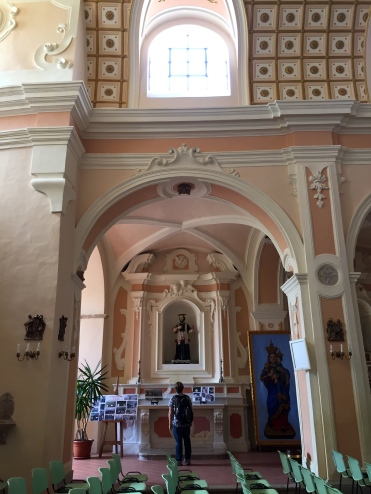 We sipped cappuccino and imagined….

And then, the thing every aspiring genealogist wants to happen, happened.  A workman in one building led us to a man in a suit on the street who led us to a man in another building who happened to be Vincenzo of the records.  For the next hour or so, Vincenzo pulled out books dating back to the early 1800’s to help us uncover missing dates of relatives. All of this happened without us speaking Italian and most of the folks we encountered having little to no English, including Vincenzo.

Deciphering Italian records is challenging even for Italians.  They are written in an archaic script.  We left Vincenzo with our email address and a bottle of wine.  Hopefully, his hunt for the Coluccis will continue.

A final stop at the cemetery outside of town showed us the unique way folks were buried.

It was a remarkable day–full of smells of pasta being cooked and sounds of church bells tolled.  The day was emotional and revealing.  Hopefully, it’s the beginning of our understanding of the Colucci ancestors.