Discoveries from Sunday in Orebro-Bjorka-Rinkaby-Palsboda-and back to Orebro:

1) In the 1800’s, when a Swedish man served as a soldier, the local community would give him a house with a little land and help support him.    If the country went off to war, he’d go on behalf of his community.  My great uncle Laurence Ekdahl and my great uncle Lars Peter Johansson both served as soldiers. This explains where they ended up living with their families.

2) My ancestors definitely came from the Glandshammer-Rinkaby-Bjorka area. 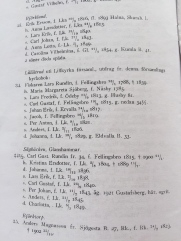 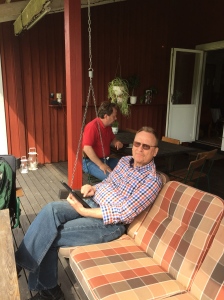 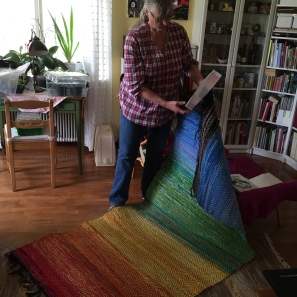 Bosse Granholm is in the background.  He and I found each other via ancestry.com and then Facebook maybe a year ago.  His half-brother Hakan sits in the foreground.  Linda is showing me a rug she wove.  These are my new-found cousins, several times removed.

3.  Discovery 3.  This falls under the “Duh!” category.  I’ve been following the footsteps of my Great Aunt Florence through her  photos from a 1957 trip.  I had in my head that she was the young woman who took the tripod-selfie shot in 1911.  Um, wronggggggg.  Great Aunt Florence made her epic journey to Sweden in 1957 when she was 71 years old.  Moreover, I’ve learned that she did not come alone, but with her sister, Davida who was a spry 67 years old. 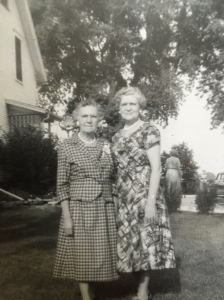 Both of these photos came from cousin Eva.  We now believe the photo on the right is the same house as the one I had in the photo below– 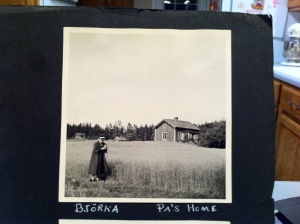 and we believe we found the location of the Ekdahl house in the 1870s-1902 in Bjorka, where I am taking this photo below..

4.  Discovery 4.  I like lingonberries.  I like Venison meatballs, made from local deer.  I like rhubarb pie and clotted cream.  I like sitting at a table with new found relatives who are all conversing in Swedish.