I’m eating a late fika at Wayne’s Coffee  in the center of Jonkoping. Fika is coffee and pastry Swedish style and apparently its a national pastime. Or maybe that’s what they tell tourists so we’ll buy coffee and dessert. As if I need any encouragement. 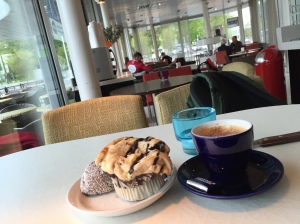 Wayne’s Coffee is two blocks from the Grand Hotel if any of you want to come to this hip haunt. This perch allows me to watch the Swedish world go by. I’m also watching birds hunt down the crumbs at the outdoor cafe tables . The way they weave and circle and bob makes me think of my own journey looking for ancestral morsels today. I was dependent on the kindness of strangers. Four souls helped me further my adventures. Before I tell you about them, let me give a context for this day’s adventure. I’ve planted myself near Jonkoping. My great grandmother through our mother’s Ekdahl then Johnson line, Christina Johnson, came from around here. She was born in 1851, emigrated in 1879, married Gustav Ekdahl in 1885 and in the 1890‘s begat Mom’s father, Arthur, (among others.)  Here she is below in the sitting in the center of the group of women.  Her daughter Florence is perched behind her left shoulder. 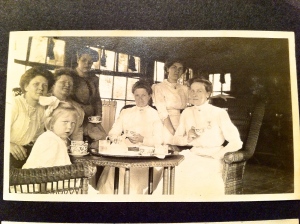 But you can ignore all of that. Just know that I’m in Jonkoping for the Johnsons. Four of five Johnson siblings emigrated to America. Lars Peter Johnson or LP, stayed. I have in my possession a postcard sent from perhaps his daughter to a Minnesota relative. On the front there is a big building and in the corner of it there is a little shop with signage overhead in big letters: LP Johansson. It was sent from Jonkoping in 1911. 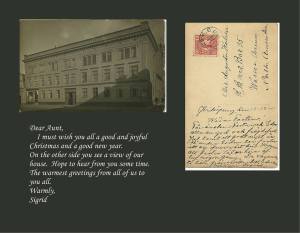 I don’t want to bog you down with the details of my hunt. The bigger story here is that I am following in the footsteps of Great Aunt Florence. 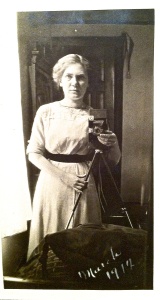 Some of you will remember that last summer, I photographed a photo album Aunt Florence made in 1957 of her trip to Sweden. (Thank you for showing it to me cousin Marcia in Illinois!) Then, I was given a second album of hers, which is where I obtained the postcards. (Thank you for the gift cousin Eileen in Minnesota!) The 1957 album shows black and white photos of relatives from I’m guessing, LP Johnson’s line. I haven’t been able to track down Axel, Ernst, and Harrold Johnson in the old photos yet, but I can show up at some of the locations : Krakarp, Hakarp, Kaxholmens. I can show up. Sometimes wondrous things happen when you show up.

First kind stranger. Sveig in Kaxholmens. I found this gentleman in a train museum. I showed him the 1957 photo and he pointed out where in town it was. He is related to Ekman through marriage I believe. He is a Johnson, but as we traced it down, we couldn’t find the connection. Why had Aunt Florence visited this house?  What was the connection to the Johnson family?  The mystery remains.  But thanks to Sveig, I found the house. 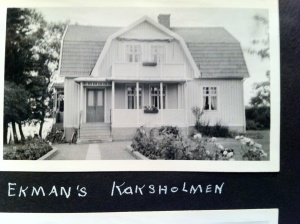 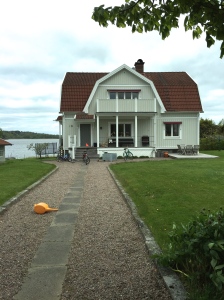 Krakarp, Christina Johnson’s birthplace, is much harder to find. Sveig showed me an old map on the wall which I photographed and then verbally gave me directions.  Go across the sea (or around the lake) and you will see a sign (which I didn’t.) 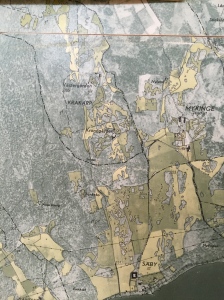 It started out a beautiful drive around a lake. 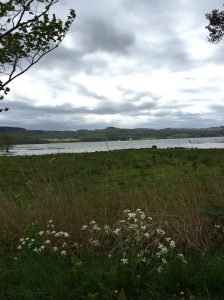 But then it went uphill from there.  Christopher and I took an infamous trip down a Colorado mountain in Rita’s jeep a few years ago and this reminded me of that. I was going up and down mountain roads that only hunters and moose travel.  Ok, there were a few domesticated animals up there. 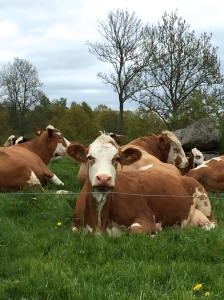 But I thought I was stuck in a ditch more than once. I followed many false trails. There were no signs. Finally, a woman at a farm told me that Krakarp was 2 kilometers up the road and that she and her husband owned it. I bumped and inched my way there and saw nothing. (Most of these mountain towns consist of three or four houses at a bend in the road. The world is pine. The air intoxicating. The narrow roads are dirt or loose stone if you are lucky.) I returned to the farm where a young man, twenty-something, stood in the road. I told him of my quest for Krapkarp and he gave me better directions. I decided I couldn’t put my rental car through anymore abuse. He said he would follow in his car if I wanted to go up again. I asked, would you take me? So I rode with Marcus Gustavson, a young farmhand,  up the mountain together over the bumpy, rutted road. I was looking for this. 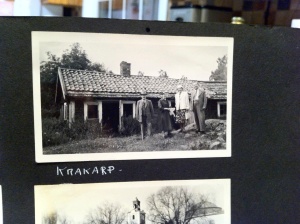 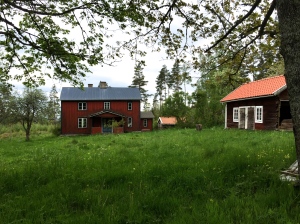 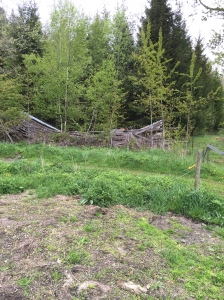 Not a clear match.  I don’t know. It raised many more questions than answers. I have Swedish census records locating Johan Larson and Eva Johansson in Krakarp with their young family, while Johan served as a soldier.  But this was so remote, I wonder if it is the place.  Still, Marcus and I had a great time riding and talking and walking together. He got very interested and kept offering to drive down other mountain paths to see if anything else was up there. I thanked him but said I needed to head elsewhere and gave him my card in case he finds the house.

My third destination was Hakarp, where Christina and her siblings moved to in 1864. There is a famous medieval church in Hakarp that Aunt Florence visited in 1957. 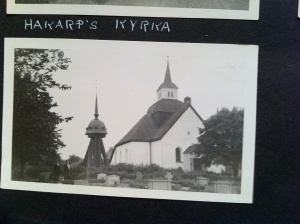 Unfortunately, it was closed until September for renovations. I decided to look at the cemetery grave sites.  Maybe Christina’s parents’ names would be there. I walked row by row. Johanssons. Gustavsons. Samuelsons. Svensons. A caretaker came up and he told me that after awhile, they get reused. I knew it was probable they were long gone.

Then he asked if I wanted to look inside the closed church! “YES!!!” And he smiled and unlocked the door. He turned on the lights, dialed up the audio track in English, and left me alone in the church. I have video that explains how old everything is with Jesu Joy of man’s desiring and the Hallelujah chorus as a soundscape. The Hakarp Caretaker took care of me and he is my third kind stranger today. 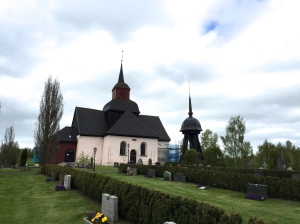 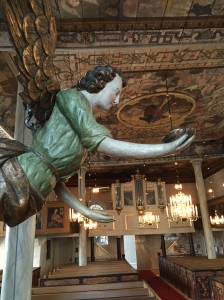 After this private and sumptuous tour, I drove into Jonkoping. One person led me to the next and to the next and finally I ended up at the archives at the library with my LP Johansson store postcard in hand. Klaus, the head archivist there, didn’t recognize the building but he scanned it and took my information and told me he’d see what he could find. In addition, they have a lovely digital archive there and he set me up so I could look at Parish records from Hakarp and Skarstad during the 1870’s and 1880’s. Of course it is all in swedish but names are names. Unfortunately, nothing jumped out. I want to give a shout out to all the other strangers today who gave me directions when I was lost or who passed me on to someone who could speak English or who laughed at me as I butchered the pronunciation of words. Bless you all. I’ve earned this late day fika. Tomorrow I leave Jonkoping and head to Orebro with Aunt Florence’s photos still leading the way. She went there and met relatives on the Ekdahl side of the family. There I shall join an Ekdahl cousin, Bosse Granholm. We will be in the hunt together.